Why do some people develop schizophrenia? University of Copenhagen researchers have just come one step closer to an explanation. Using small fruit flies, they have become the first to map the genes of a chromosomal change that is the strongest identified risk factor for developing schizophrenia. In doing so, the researchers have succeeded in gaining insight into a gene that influences whether or not a person develops schizophrenia.

For quite some time, it has been acknowledged that three small chromosomal defects are responsible for increasing the risk of developing schizophrenia. In particular, a deletion on chromosome 22, known as 22q11, is one of the strongest identified genetic risk factors for developing schizophrenia. Indeed, roughly 30 percent of people with this chromosomal change end up with the disease. While the chromosomal abnormality affects 43 genes, it was previously unknown which of the 43 were responsible for this highly increased risk.

Now, researchers at the University of Copenhagen’s Department of Biology have become the first in the world to successfully turn off each gene, one at a time, so as to identify the cause of the elevated risk. The researchers were able to achieve their results using small fruit flies, Drosphila, as experimental models — thanks to their genetic similarities with humans. In fact, humans and fruit flies share about 70 percent of the genes that relate to disease.

"One at a time, we switched off the genes affected by the 22q11 chromosome abnormality in the brains of fruit flies and examined what genes are necessary for the brain to function normally and not exhibit schizophrenic behaviour. We discovered that one of the key genes is the so-called Lztr1-gene, which we have coined "Night owl". The name reflects the gene defect’s provocation of sleep disorders, that are so characteristic among people with schizophrenia,” explains Biology Professor Kim Rewitz, who is behind the study.

“This suggests that if one has a 22q11 chromosome defect, a malfunctioning Night owl-gene may contribute to an elevated risk of developing schizophrenia".

One known risk factor for developing schizophrenia is the occurrence of disruptions in GABA, an important sleep-regulating neurotransmitter in the brain. Closer examination of the Night owl-gene lead the researchers to another discovery. It turns out that the Night owl-gene interferes with GABA signalling as well and could thereby increase the risk of developing the disease.

The potential for improved schizophrenia treatment

The mapping of genes in the 22q11 deletion, including the Night owl gene, marks a step towards understanding the mechanisms underlying schizophrenia. It opens the door to further knowledge creation about what is actually going wrong within brain cells.

"Knowing that Night owl and the other genes mapped in this study may influence the risk of developing schizophrenia is a step forward in and of itself. We hope that this will lead to a greater understanding of disease mechanisms, so that we can better target our efforts to develop drug therapies,” says Kim Rewitz.

The researchers behind the study don't believe that 22q11 is the only gene responsible for provoking schizophrenia. They believe that complex diseases like schizophrenia occur due to interactions among several genes. As such, they would like to take a closer look at these interactions and at what happens with fruit flies when the Night owl gene is turned off while simultaneously switching off one of the other genes in the 22q11chromosomal abnormality.

“Doing so would probably enlighten us about the interaction among genes affected by the chromosomal abnormality in patients with schizophrenia," continues Kim Rewitz.

The researchers will continue to use fruit flies as a genetic model:

"Fruit flies are outstanding experimental models. Roughly 70 percent of the genes related to human diseases are found in fruit flies, so one can use them as a model to study which genes affect the onset of diseases in humans,” says Kim Rewitz.

Using the most advanced genetic tools, the researchers are also able to test thousands of fruit flies at in the lab simultaneously. Fruit flies have a very short generation time, so it is easier, cheaper and faster than experimenting with mice and rats. This serves to produce new knowledge about biological mechanisms and disease processes much faster.

The next step will be to test the results on mice.

The findings have just been published in the renowned scientific journal, PLOS Genetics. 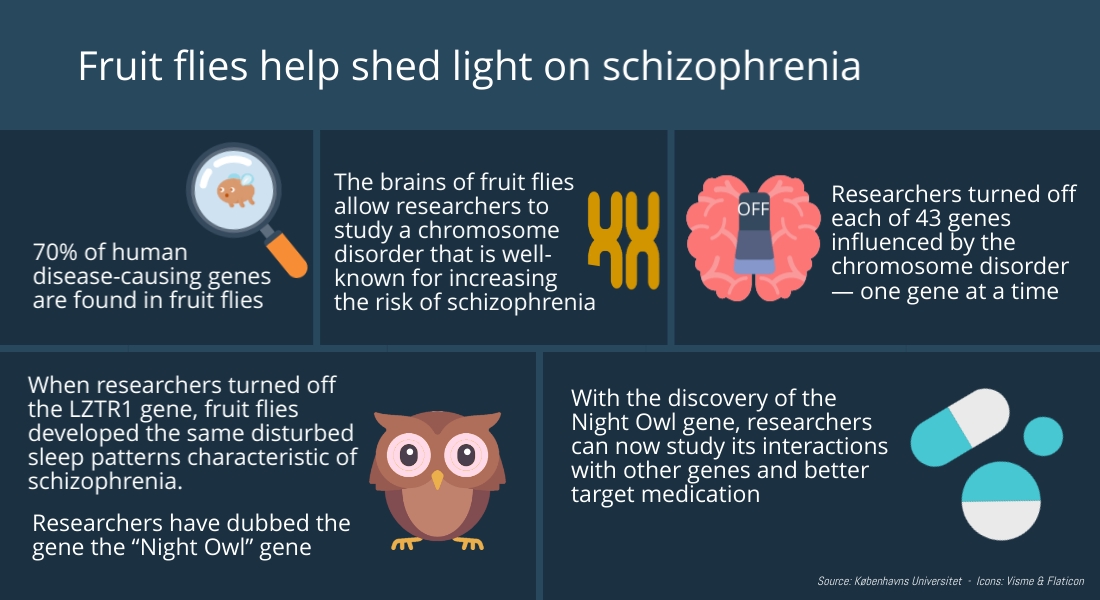