Oxygen was present in the atmosphere much earlier than previously assumed

Reconstructing the emergence and evolution of life on our planet is tightly linked to the questions as to when and to what extent Earth’s atmosphere became oxygenated. New geological studies based on data from Western Greenland indicate that small levels of atmospheric oxygen developed already 3.8 billion years ago, some 0.7-0.8 billion years earlier than previously thought. 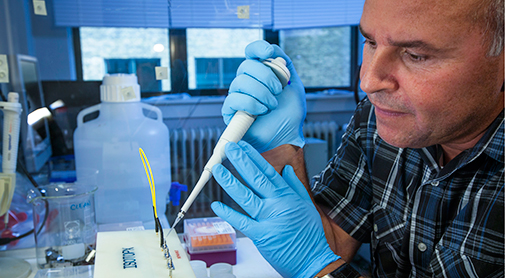 Professor Robert Frei preparing for isotope analyses in the laboratory at the Department of Geosciences and Natural Resource Management, University of Copenhagen. Photo: Kent Pørksen.

An international team of researchers led by Professor Robert Frei from the Department of Geoscience and Nature Resource Management at the University of Copenhagen has just released a study indicating evidence for the presence of small concentrations of oxygen on Earth already 3.8 billion years ago. The researchers analysed Earth’s oldest Banded Iron Formations (BIFs) from Western Greenland. BIFs are marine chemical sediments originally comprised of alternating layers of silica and Fe-hydroxides and are widely used as geochemical archives. The reason for this is that they retain information on the composition and presence of oxygenation/reduction processes in ambient seawater and on the interaction of the atmosphere with Earth’s surface.

The research team used concentrations and isotope compositions, i.e. variations of the same elements with different atomic weight, of the elements chromium (Cr) and uranium (U) present in the BIFs. Chromium and uranium were used as these elements weather rapidly when continental landmasses are exposed to reactive oxygen species (ROS) such as oxygen (O2). After weathering, they are transported to the oceans by rivers, where they are deposited with chemical sediments and serve as geochemical signals of weathering by ROS.

One of the studied Banded Iron Formation (BIFs) samples from Isua, Western Greenland, showing the layers of deposited marine sediments.

The fact that the analyses of the BIF layers from Western Greenland show elements that require presence of oxygen in the atmosphere opens up for the possibility of evolution of the earliest primitive photosynthetic life forms as early as 3.8 billion years ago. As Robert Frei explains: “It is generally believed that the Early Earth was a completely anoxic, but our study shows that the surface of the Earth was exposed to a low oxygen atmosphere already this time. This has far reaching implications for how we investigate the pace of evolution of life and its biodiversity on our planet.”