The University of Copenhagen’s Hussam Nour-Eldin heads a research team that has just received ten million kroner for basic research geared towards a future of increasingly bountiful harvests and ever more nutritious cereal crops.

It was just another lonesome day of working from home during the COVID-19 pandemic. Into Hussam Nour-Eldin’s inbox popped an email that would tickle him with joy for the rest of the day.

In the mail, Hussam and his team of researchers were informed that they had just been awarded ten million kroner to continue their research into understanding how to make crops more effective. Specifically, how to plant more seeds or grow more nutritious crops.

“I was incredibly happy and proud, and immediately rang up the rest of the team,” recounts Hussam Nour-Eldin, an Associate Professor at the University of Copenhagen’s Department of Plant and Environmental Sciences, and head of the research group.

“It is a very exclusive grant, one that is difficult to attain. As such, this is a major acknowledgment of our work as a research team,” asserts Hussam Nour-Eldin, on behalf of his Israeli, English and American colleagues.

The four researchers have been studying how plant hormones regulate plant growth and crop yield since 2015.

“An array of mutations in wheat, rice and corn came about in the 1950’s that made each of these crops shorter, and thereby more wind and weather tolerant. The mutations made it so that the plants used energy to produce more and larger grains instead of long ears,” explains Hussam Nour-Eldin. He adds:

“Not until the 1990’s was it discovered that these crops had genetic mutations that either produced or reacted to an important hormone in them called gibberellic acid. This caused crops to radically change to become the shorter modern crop varieties that are currently cultivated so widely around the world.” 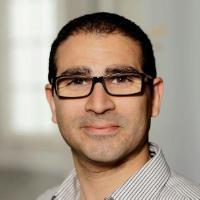 While it has long been acknowledged that there are genes which transport gibberellic acid in plants, until Nour-Eldin’s team groundbreaking discovery, the precise role of the genes for plant growth remained a mystery.

In 2015, the team of researchers mapped the first gene that influenced the way in which the gibberellic acid hormone was transported in plants. This is the breakthrough that the new grant will allow them to continue working on for the next three years.

“Just as the 1950’s lead to more effective crops, we hope that we will be able to tweak plants in such a way that they will produce higher and more nutritious yields down the road,” concludes Nour-Eldin.

The research started in 2015